A Violent or Threatening Altercation Between two or More Individuals That Could Escalate Into a Larger, More Serious Altercation 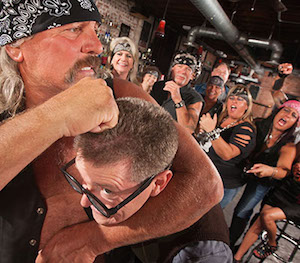 An example of a simple affray could be an argument between two individuals at a bar that leads to a fist fight. Friends on both sides of the fight join in resulting in a brawl. The simple affray charge is a very specific charge aimed at punishing an individual for not only resorting to violence but also for inciting further violence from another individual or individuals. Law enforcement officers use this charge as a way to keep the peace during a potential riot situation. If you have been charged with a simple affray, it is very important that you seek out the advice of a qualified Charlotte criminal defense attorney or Concord criminal defense attorney.

When fighting charges like simple affray it can be important to get counsel early as there may be witnesses. Going out and trying to find parties that saw the altercation and that can support your side of the facts or help shed light on the matter can be the turning point of your case. Sometimes it is not necessarily finding a person but finding out that the facility or area of town has video cameras that can be subpoenaed. Information is especially important in cases involving multiple lay witnesses. We understand that gathering information about who was there and getting any relevant videos is just as important part of your case as the argument itself. In many cases without the information the argument will fall on deaf ears or be harder to be persuasive.

Simple affray charges are not the most serious offense, but can still result in unpleasant consequences. We have handled thousands of misdemeanor cases and we understand each case no matter the charge, means the world to that particular client. This is a charge of violence so while it may not result in jail time, employers will certainly see it with negative eyes.

Consequences of simple affray charges can carry minimal jail time, fines, community service and probation. In most cases even if you were convicted of simple affray charges unsupervised probation and maybe some community service is the likely outcome. However, there can also be restitution amounts owed if there were injuries as the result of the incident. An attorney at one of our offices can talk to you about all of your defenses as well as possible consequences. We handle many counties in North Carolina and each county has their own routine sentences and expectations.

Contact Us
Practice Areas
Client Reviews
★★★★★
Everyone at the Osinski Law Firm was prompt, professional and responsive. I was kept informed and notified when a resolution was in place. I would not hesitate to use Kimberly Olsinski in the future. David
★★★★★
My service was great, I was very satisfied. The staff was great as well, keeping me informed, explaining my case and helping me understand the outcome. Michele P.
★★★★★
Very professional at all times. Worked hard for me. I had no worries or concerns that my ticket would be handled. I would for sure recommend her to my family and friends as well as use her in the near future. Roxanne
★★★★★
I'm glad I chose this firm, my case was handled quick and worked out great in my favor. I would refer them to anybody that is hoping for the best outcome. Chris A.
★★★★★
I'm glad I called the Olsinski Law Firm. They took time to listen to my story from the accident and explained everything in full detail. I am completely satisfied. Thank you! Sonjinika
View More
Submit a Law Firm Client Review