JUSTICE Our Job. Our Focus. Our Passion.
Contact Us for a Free Consultation
Home
Attorneys
Justin C. Olsinski Esq. 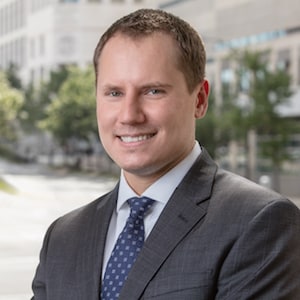 Mr. Olsinski went to law school with one focus, to become a criminal defense attorney. Upon graduation and moving down to Charlotte North Carolina, he spoke with other attorneys in the area and decided to open his own practice. He opened the firm in January 2010 and has been growing his experience and the firm throughout the years. Mr. Olsinski has successfully defended cases from B1 Felony First Degree Sex Offenses all the way down to Misdemeanor marijuana charges. He has been named a Top 40 under 40 Attorneys in North Carolina by the National Trial Lawyers as well as the American Society of Legal Advocates. He has focused his work on criminal defense work handling mostly felony and serious criminal charges.

Mr. Olsinski attended Indiana University-Bloomington where he received his Bachelor of Arts in Criminal Justice and History. He attended Hofstra University School of Law, where he graduated in the top half of his class. At Hofstra, he focused his legal course work to center around criminal defense work. While finishing up law school he completed a ten-day intensive seminar emphasizing effective trial advocacy techniques.

Mr. Olsinski is married with a 2 year old daughter and an 8 year old dog. He enjoys spending time with his family, watching sports and playing sports.

Professional Honors
Associations
Legal Cases
Bar Admissions
Case Results
Contact Us
Practice Areas
Client Reviews
★★★★★
Everyone at the Osinski Law Firm was prompt, professional and responsive. I was kept informed and notified when a resolution was in place. I would not hesitate to use Kimberly Olsinski in the future. David
★★★★★
My service was great, I was very satisfied. The staff was great as well, keeping me informed, explaining my case and helping me understand the outcome. Michele P.
★★★★★
Very professional at all times. Worked hard for me. I had no worries or concerns that my ticket would be handled. I would for sure recommend her to my family and friends as well as use her in the near future. Roxanne
★★★★★
I'm glad I chose this firm, my case was handled quick and worked out great in my favor. I would refer them to anybody that is hoping for the best outcome. Chris A.
★★★★★
I'm glad I called the Olsinski Law Firm. They took time to listen to my story from the accident and explained everything in full detail. I am completely satisfied. Thank you! Sonjinika
View More
Submit a Law Firm Client Review