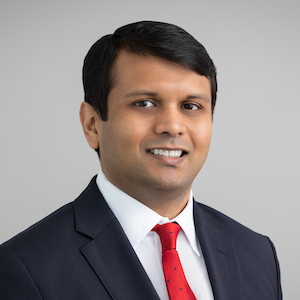 Viral Mehta has called Charlotte his home for over 30 years. He graduated from nearby Davidson College with a Bachelor of Arts in History. Mr. Mehta obtained his law degree from Wake Forest University School of Law and then returned home to Charlotte to begin his legal practice.

Mr. Mehta is a North Carolina State Bar board certified specialist in workers’ compensation law. He has obtained favorable decision before all levels of the North Carolina Industrial Commission, Court of Appeals, and Supreme Court. He was a contributing author of the 2017 edition of the North Carolina Workers’ Compensation LexisNexis Practice Guide, and he was selected as a Super Lawyers Rising Star in 2019 and 2020.

Viral is married to Christina Mehta, and they have a dog named Alfred. He enjoys spending time with friends and family, traveling, sports, and reading.

Contact Us
Practice Areas
Client Reviews
★★★★★
Everyone at the Osinski Law Firm was prompt, professional and responsive. I was kept informed and notified when a resolution was in place. I would not hesitate to use Kimberly Olsinski in the future. David
★★★★★
My service was great, I was very satisfied. The staff was great as well, keeping me informed, explaining my case and helping me understand the outcome. Michele P.
★★★★★
Very professional at all times. Worked hard for me. I had no worries or concerns that my ticket would be handled. I would for sure recommend her to my family and friends as well as use her in the near future. Roxanne
★★★★★
I'm glad I chose this firm, my case was handled quick and worked out great in my favor. I would refer them to anybody that is hoping for the best outcome. Chris A.
★★★★★
I'm glad I called the Olsinski Law Firm. They took time to listen to my story from the accident and explained everything in full detail. I am completely satisfied. Thank you! Sonjinika
View More
Submit a Law Firm Client Review